The centrality of rivers in Britain comes to the fore in the Bronze and Early Iron Ages (c. 2500–400 BC) – a period of unprecedented human/object mobility. Fields, settlements, and burials accrued along river valleys, riverine human/object offerings burgeoned, and travel along rivers increased. However, our understandings of rivers are fragmented: archaeologists have focused on the largest and hence potentially atypical examples, and they have often treated rivers as passive backdrops for human action. Ebb & Flow will put rivers first – offering a novel, in-depth look at human activities along/near/in/on four diverse river systems and illuminating how rivers actively transform the world. 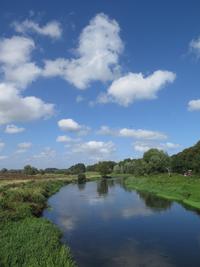 We will examine the fullest possible suite of Bronze/Early Iron Age evidence from four widely-spaced British river systems with different archaeological and physical characteristics: (1) the Ribble; (2) the Witham/Nene/Great Ouse; (3) the Medway; and (4) the Hampshire Avon (blue). We will also contextualise our evidence with that from the well-studied (a) Thames and (b) Severn (light blue).

Central to our project is the idea that rivers formed active parts of changing landscapes. In order to understand the significance of rivers and how they were entangled with human lives, we must look at landscapes as wholes, not as sets of fragmented environmental entities. Our case study rivers will be investigated within river catchments to enable comparison of human activity on land (from valley bottoms to ridgeways), water (including rivers, streams, springs and lakes), and across their interfaces (from wetlands to floodplains).